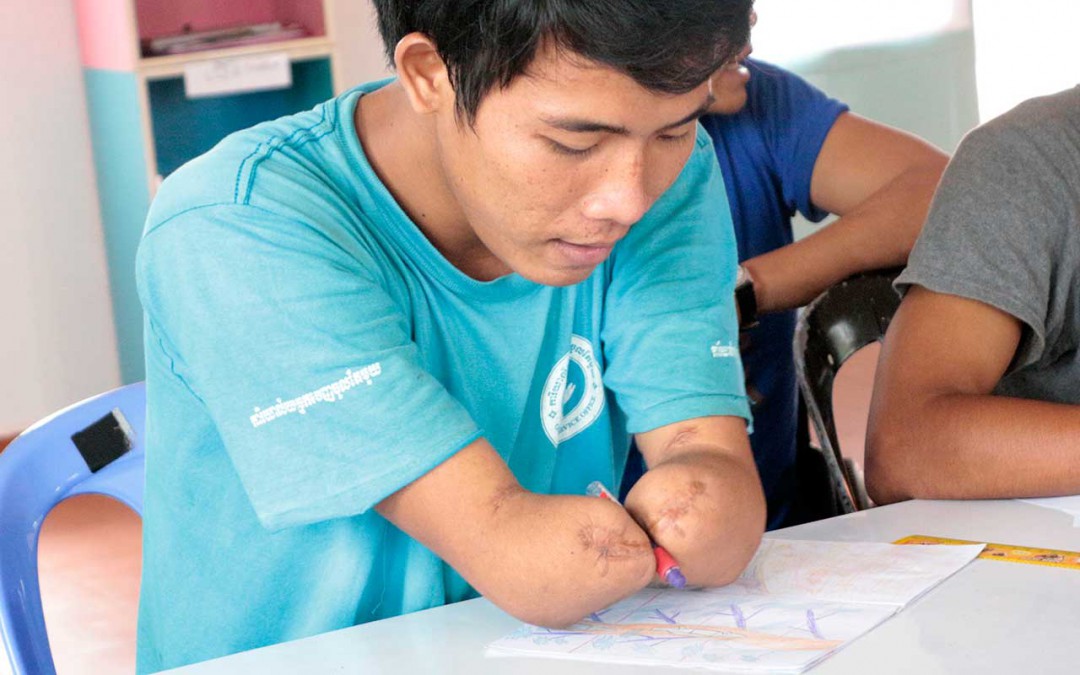 Our Inclusive Arts Course began in April 2015 thanks to  generous donations at the start of the course and continued donations from our Global Giving page. We welcomed 12 students on to the course this included Chea, who tells his story

I want to tell you my story. I didn’t know that when I joined Epic Arts I’d grow in confidence and that I’d discover a talent and passion for drawing!

I was 16 when I dropped out of school. This is normal in Cambodia it’s just what you do when you’re old enough to work and help your family. There was a lot of construction work around my town so I decided that’s what I’d do. In total I worked on construction sites for five years before my accident.

In 2011 I started on working for a new company. It was a good job, I’d been working there for 20 days when my boss asked me to install a roof. I’d done this loads of times before so I climbed up the 4 metre-tall concrete column to begin my work.

I don’t remember much after that except my life changed forever.

I was holding the metal roof panel. I didn’t notice the electricity cables above me. Thinking about it now, it was a death trap.

Electrocuted, that’s what doctors told me when I woke up.

My friends said they saw me catapulted through the air whilst they watched in shock as I hit the ground.

The metal roof had connected to the cables above me and I was on the floor unconscious.

I woke up in the hospital to these stories and two arms that were turning black. Day after day I watched as the dark rot crept up my arms like a poison, they couldn’t be saved. I had to have surgery to have them removed.

After the amputation doctors told me I was lucky. I still had the use of my elbow joints, but I was hopeless. All I could think of was terrible things like “How can I live like this? It would be better to die”

Devastated all I could do was cry. I became a different person, I used to be so full-of-life. It wasn’t long before I spiraled into a deep depression, drinking everyday and hardly leaving my parents house for three years.

Terrified and angry I felt alone and useless. I couldn’t see a future for myself that’s why during those three years I stayed inside and drank rice wine.

An uncle of mine wanted to help me. He visited every week and gave me a small bit of money to feed his ducks. I began to drag myself out of the depression.

Soon after that a Social Worker from Epic Arts met my mother and told her about the Inclusive Arts Course. “How can a person who uses a wheelchair dance? It’s impossible, I can’t even use a spoon!” was my first thought when I heard about Epic Arts. I wanted to see for myself.

I went along to the open day where I met Epic Arts staff. I was so surprised, they had disabilities but they were having fun and they were happy. That’s when I knew I wanted to join Epic Arts

After two years of studying at Epic Arts I am myself again! I wake up happy everyday something I never thought I’d feel again. I think that because of Epic Arts I have a future and I can do anything I want. I used to cover my arms with a towel and get angry when people stared now I show them my arms in a funny way and I tell them my story. I used to pity people with disabilities, even myself, but now I think that if you have a disability it doesn’t matter! We can all do anything we set our minds to

Whilst editing Chea’s story I’ve been able to hear him as he laughs and sings from across the building. He’s a completely different man to the one I met almost two years ago. Back to being the life and soul of the party, the cheeky chappy, the confident young man he was before his accident.

Thanks to your donations Chea and 11 other students will graduate from our course in April 2017 and we will welcome a whole new group of students to Epic Arts.